In the App Store!
A while back someone asked if they could use The Ultimatest grocery lists as a starting point for their iPhone shopping list app. I said “go for it!” and have been using it since spring when it was released. It works great and I’m happy to recommend it.

Here’s the deal… everyone who sends in a grocery list during the month of August (through this site only — sorry but snail mail won’t count for this) will be entered into a random drawing to win a promo code for the app. So you’ll get it for free. The app is Awesome Shopping List and truthfully, it’s already a bargain but hey, everyone likes free things, right?

Out-of-print!
What else is going on? Hmmm. The Jimmy Kimmel experience was fun. It caused a run on MEV books at Amazon which pretty much immediately sent Milk Eggs Vodka into “out-of-print” status. Here’s hoping there’ll be another edition one day. Thanks to everyone who bought it. You can still get it in lots of places — including Amazon — but the original printing is now officially out.

In honor of this historic occurrence maybe we will make these White Russian Cupcakes, which feature milk, eggs and vodka as ingredients!

Sandwiches!
August is National Sandwich Month and every year I challenge myself to each a sandwich a day for the entire month. So far, so good. 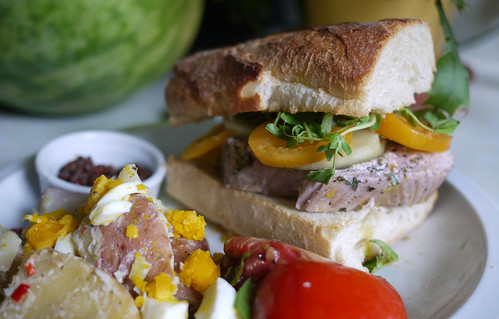 That’s all for now. Bye.